Medical
This is a lot to deal with. I'm just saying. I'm hungry! But I don't yet have a handle on what's safe to eat.

I didn't get through to the gastroenterologist's office on Friday; Will call today. In the meantime, I'm trying to pre-emptively go off gluten. I was going to keep my diet normal until the biopsy, but I had pizza Friday night and got a dreadful stomachache. So. We'll see when the biopsy is. If it's not for a few weeks, which is what I'm expecting, I can stay off gluten til the week before.

EDIT: Yeah, they can't get me in until December 2. And that's just for the appointment, not even biopsy. Ummno. I go off gluten now, thanks.

IAF Auction
It needs your help! I think maybe the person who was supposed to send the press releases didn't, because I sure didn't see 'em anywhere. So if you would - please spread the word about this niftiness! 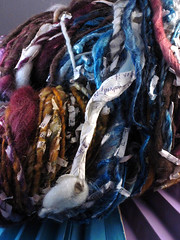 emilytheslayer's piece. Tell all your fibergeek friends! And here's her artist statement:

"When I read Shira’s story “Valentines” the image that immediately struck me was at the end, with the paper flying around the room in snowy drifts. I wanted to find a way to keep the protagonist’s observations together for her, and because I tend to think in fiber, yarn suggested itself to me. The more I thought about it the more I realized that this yarn had three sections, one for each of the Valentines, and from there I saw that the foods eaten at each place could be represented by the colors of the fiber. I gathered several different types of fiber, shredded several copies of the story, and carded them all together on a borrowed drum carder. I also hand wrote several of the lines from the notebook in the story and worked out how to spin these lengths of paper into and around the yarn. In a strange bit of synchronicity, the paper I chose for this piece of the yarn came from Caesars Palace in Las Vegas, which, Shira informed me, is strange, because she actually meant for the story to be set in Vegas, but decided not to make it obvious in the text. When I spun the yarn (single ply) bits of the story would fall and flutter and fly around my wheel, leaving my work space every bit as paper-covered as the character’s apartment at the end of the story. This yarn will change as you use it or wear it; the paper is going to continue to fall out a little at a time, much like memories."

catvalente! Backing music by Brian Francis Slattery and his band! Please come, and spread the word!

You can see video of the NYC event here. :)

netdancer is selling Avon to buy basic-needs stuff: scooter batteries, a shower chair and handrail for the tub so she can bathe safely. Go shop!

siliconshaman has rescued a kitty!

"Griselda is a rescue cat you see, and being both blind and FIV positive, I dare not hand her over unless she's in obvious good health, otherwise they are bound to just turn around and put her down. [technically, we have no-kill shelters here, but that only applies to healthy cats.] I'd keep her, but we'd run the risk of infecting the others... She's actually got a number of years left in her, since the FIV is still in the dormant phase. [and even with fully developed FIV, cats can live for years if they're looked after and indoors kitties.]

I'm kinda hoping that a few of your f-list would donate, or signal boost if they can't afford to...every little helps after all."

Knitting
Yep, I screwed up the Travelling Woman shawl; not enough stitches when I got to the lace section. Which I tried to do anyway. So now I have to figure out how to fix that. Erf.

Does what it says on the tin. Yes, yes, yes, I want your gluten-free recipes and advice! I kinda have to completely re-teach myself how to eat. If you can help? Thank you so much.

EDIT: Worthy of note, as

rm recalled: I am allergic to soy, so anything soy-based is also off-limits.

ALSO EDIT: I don't like beer, so you don't need to do beer research! :) And there's a pizza place in Belmont and Porter Square that does GF pizza/pasta, so that's not a high priority. Main priority is stuff to do at home and nonpizza. Tips about stealth gluten (in caramel coloring, in malt) are especially sought.

* In case you're wondering why I never took special note of feeling oogy and connecting that to something in my diet not being good for me: I've been nauseous and oogy to varying degrees every day for over six years, since I started anti-seizure medications. Pain and queasiness have been part of the picture for a while, and I never thought to look beyond side effects...

* I am very intimidated and very lost. That you for your help/recipes.

* This will be difficult and confusing. :(

* I keep realizing - every few minutes, feels like - all of the things I can never eat again. And how hard it's going to be to visit family over $WINTERHOLIDAY. And everything. It seems insurmountable, like I'll be subject to stealth gluten everywhere I go no matter what.

EDIT: Also? I don't cook. Like hardly at all. (I bake, but that's off the table now.) I'm used to being able to grab a peanut butter sandwich or can of soup or whatever for lunch. I'm used to shortcuts. This change is vast.

ALSO EDIT: And yes, I'll stop yammering on about this eventually. But it is a big life shift. So.

Joe Kessler of Boiled in Lead.

I get to be on the same stage as him and he is playing music for my story and OMG PEOPLE I have only had a massive art-crush on him for like a dozen years and holy crap this is a thing that is happening.

* BARCC colleague baked me GF cookies! And other BARCC colleague took my diagnosis into account when choosing a post-meeting place: "Can you eat there okay?" The support = awesome.

Medicated and so bedtime now.
Collapse