Medical
My voice is gone. Well, I was on five panels, did an hour-long reading, attended two wild parties, and played in a four-hour LARP, in addition to general hanging out and talking with friends for four days straight. :)

Otherwise... slept til nearly ten. Tired and achy, but not incapacitated. Am in the danger zone - where I look around at the messy house and say to myself "Well, I'm not hurting *too* much. I can totally do this." Must remind myself that if I do anything today, I'll be laid out for another week. Must remind myself that I have Vericon next weekend. *nod*

Random Arisia Notes
* The oft-admired necklaces I was wearing were by Wyrding Studios; check them out!
* The gorgeous tall male belly dancer I had in tow was

perldiver - "spathic". Geological term referring to cleavage. :)
* Many thanks to those of you who made a point of complimenting me on my newly-reacquired curves! I spent years as an unintentional size zero, and I'm not quite used to my new shape yet. It's good to get reminders that I was not just too skinny, but I was bony enough to terrify not just friends, but acquaintances. That this is healthier. The relief in faces and voices was heartening.
* The fragrances I was wearing were by Black Phoenix Alchemy Lab. (I got a lot of "You smell wonderful!")

Nyargh.
You can't teach a pig to sing; it wastes your time and annoys the pig.

Yeah. I need to not continue to try to make points in post-Arisia discussion. Will give myself the day off, then write up What Went Wrong and How We Can Change It tomorrow, with a clearer head. Also need to finally write the Raising Fandom: The Next Generation post I keep threatening. 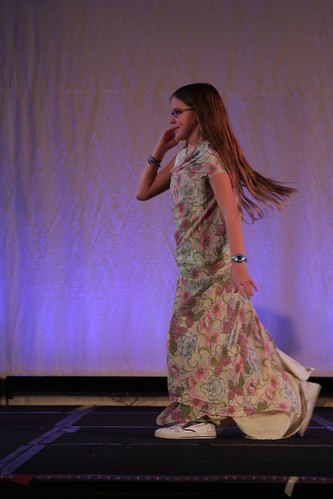 tamidon's older daughter whipped this up out f two lengths of fabric and a handful of safety pins during the Kamikaze Kids Masquerade session. She did not know who she was; I told her to tell the Masquerade staff that she was Inara from Firefly. It was that kind of dress.

Daily Science
Thoughts on Enceladus as a home to life have kept astrobiological debate lively, an unexpected but welcome development from the Cassini mission. The interest is understandable: Cassini has shown us plumes that seem to be the result of some kind of geothermal venting, with liquid water and geothermal energy sources all possible drivers for the formation of life. We don’t exactly know what’s going on here, but the possibility of a hydrological cycle — liquid, solid, gas — has kept theorists active, as witness a research note by Christopher Parkinson (Caltech) and team.

The early Earth serves as a possible model for life elsewhere. With photosynthesis not available, life would depend on abiotic sources of chemical energy. It’s believed this would have come in the form of oxidation-reduction processes driven by factors like hydrothermal activity, impacts, electrical discharges, or solar ultraviolet radiation. Organics may have been synthesized from inorganic molecules near submarine hydrothermal vents. In similar ways, the authors believe, Enceladus may offer energy-generating reactions that create conditions favorable for life.

Plans
* Hanging out with

asim, then getting him to the airport. Anyone available around 4 to give us a ride?
* Diesel tonight with my sweetie. :)

Elayna, on phone with friend: "It's Tuesday. So my Mom's going to Diesel, and as soon as she leaves the house, all of her friends are going to call and ask if she'll be there and if she needs a ride."
Me, downstairs: *cracks up*
Elayna: "Aaaand she just heard that."

Hi. Yes, I'll be at Diesel, after I escort

asim to the airport. No, I don't need a ride. Please do not call, as Elayna needs to finish her homework undistracted. :)

So Heath Ledger is dead, a possible suicide.

I'm going to go on a few tangents here. Bear with me.

My instant reactions: shock, sorrow... and anger. The sorrow because he really was a tremendously gifted actor, and had so much there. The anger? He has a two-year-old daughter. And... dammit, when you have a kid, you lose the right to bow out like that. You cannot do that to a kid.

Over the course of the evening, other reactions set in, and some of them are stuff I never talk about. So.

When I was fourteen, I tried to kill myself and ended up in the junior loony bin.

This was the '80s. This is what you do when you don't know what to do with your kid: you stick them in the junior loony bin til your insurance runs out. (No, dear college-age readers, I'm not joking. This happened to many a misfit.)

When you're in a situation like that, you form hard-and-fast bonds. So a bunch of us kept track of each other when we got out.

Within three years, half of us had died. Suicide or probable-suicide in the form of really excessive drug overdose. Jason. Mikey. Ben. Connor. Rachel. The rest of us? We drifted apart. Because holy fucking shit, guys, when you're sixteen, seventeen, and another fucking one of the people you bonded to offs themselves... you get to a point where you can't take it any more. You can't take losing anyone else - you can't take knowing about losing anyone else.

For all I know, I am the sole survivor of my childhood and adolescence.

I identify with a lot of characters in Rent. But one most of all. Mark.

"Perhaps it's because I'm the one of us to survive..."

Part of why I never did off myself is because I had to know, have to know, what happens next. I cannot leave my story in the middle.

But part of it? I alone have escaped to tell you. Someone has to remember.

It's why I write Walking on Water. Someone has to remember.

So yeah. There's the hollow crushing shock of losing someone I've never met, in large part because I have wrestled those demons and survived and many people did not. And there's the frustratingly outlet-free anger that he did this to his child. Because when you have a kid, you cannot do that shit. You live for that child. I live for mine. Even when things were at their worst, I have lived for my daughter.

I haven't been in that place for a long time. But I still have the map that led me out. And I remember those we lost along the way.

I've played this song for

feste_sylvain before. But I don't know how much he Got It til I played it for him tonight, after talking to him about this stuff. If I had to limit the playlist at the core of my Self to five songs, this would make the cut. In Shayara, I have gifted it to Fenris and Julia.

"If I Ever Leave This World Alive", by Flogging Molly.