My energy this weekend had peaks and valleys. Oh, yes. I was mostly functional, with Saturday being the worst day - Saturday I was near tears from pain, managed to balls-out steamroll my way through my Hands-On-Science For Kids panel, and popped a Flexeril as soon as I was safely ensconced on

theferrett's lap at the Livejournal and Your Social Life panel. Got through the LJ Meet & Greet by planting my butt in a chair, sending a Coffee Minion for coffee, and basically exuding the "come forth and pay homage to me" aura. Or something like that. Had to go straight from there to the What Would My Superpower Be? fast-track panel... where the Flexeril finally hit, and I found myself nodding off. Excused myself and went to lie down. Did not wake up til 10 minutes before my party. *facepalm* Did leave my party at a somewhat reasonable hour, though, so I was a bit better on Sunday, though I was clearly feeling the weight of the weekend dragging on me.

The elevator situation? Did Not Help. I always go SuperGimp in situations like these - oh, sure, I can take the stairs? No. No, I cannot.

Sunday afternoon, I was off to another gathering, where the Craftsman was good enough (oh, was he!) to test my body's reactions to various implements of torture.

Yes, I know that it's less than wise to play like that after a physically arduous weekend. But you haven't seen our schedules, man. We'd been trying. (Plus, it was kind of our anniversary.)

So now we know that my butt can handle quite a lot of abuse (I'm pretty colors!), as can my lower back; my upper back cannot endure even a moderate flogging. More fat padding the butt muscles than the back muscles. (Science is sexy!) Flogging my back produced that column of pain along the spine. So. Now we know.

And knowing is half the battle.

Hot-tubbing today helped; I've tightened up again now, due to sitting/typing in a bad position for a few hours.

It'll take me some time to recover from this weekend, but I'm damn glad I did it. :) Feelings on the con itself, I'll post tomorrow (summation: bad hotel, great people, some amusing situations, didn't feel like Arisia - maybe due to unfamiliarity of hotel?). I wanted to note this stuff while it was fresh, as it were.

I'm in an odd place right now. This is really the first chance I've had to just sit in solitude for over a week, and sit, period, since Friday morning. Elayna's still out of school, so we're not totally back to normal yet.

xthread! If I met you at Arisia, please remind me when and where? (

amalthya, I certainly remember you. :) And

xthread.) (No offense to those I don't recall - I meet a lot of people at cons, generally 30+ each con.)

Lost and Found
Every item we lost has been found. Yay! Elayna located her Mousie-drawn badge and hat, and my science books were turned in to the amazing

Family
Mousie has been gone all of two hours, and I am pining.

My Party
Best summation so far comes from

shadesong's party while half-naked people rolled around on the bed I was leaning on: especially awesome. Seriously, there is nothing better than a crowded noisy party where I can sit quietly out of the way and do crafty things that fend off people I don't know while people I do know come over and chat with me."

I have succeeded as a party host. *beam*

I would list who-all was there, but I am right now too tired. Please wave in comments if you were there so people can friend you if they'd like!

I have no science prepared, and I'm too low-energy for BPAL, so I leave you with eye candy.

asim is gorgeous. Now I nap.

Thursday
Spent the day with Miz Mouse, talking Art and Story and whatnot. Spent the evening with Mouse and

theferrett, talking about everything. Mousie's already Family... I'd met Ferrett once befoe, briefly, and had grown close to him online, but it was Thursday night that he really became Family. Easy grins and quiet geeking out and snuggling... Thursday was a very good day. :)

Friday
Oh, shit, gotta pack for the con! *laugh* I darted around getting that done, and ran out to CVS with Ferrett to pick up my Lyrica ($150 my ass). That turned into a bit of a wander around Watertown Square, getting Starbucks and baklava and generally calming me.

...and then our ride was quite a bit late, and I got agitated again, a state that unfortunately lasted for a while. I have a bit of difficulty adjusting when nothing goes according to plan. It's not as bad as it was when I was on Trileptal, but I am still on brain-altering drugs. So. I do best when I can be in charge of things, and Friday afternoon was a bit of an exercise in putting things in the hands of other people, who did not do things as I would have liked.

And then there was the hotel.

Others have mentioned the obvious problems, such as the elevators that broke if you looked at them the wrong way, the very poor location of the art show, dealer's room, et cetera. I had yet another problem with it - the NOISE. The acoustics in that atrium... *frustrated sigh* It sent me to the then-nearly-empty ConSuite, trembling like a chihuahua. Too much stimulus. Way, way too much stimulus. It took me a sizable chunk of the weekend just to deal with that. This hotel was not made for large conventions. I understand how difficult it is to find a hotel that can fit Arisia in at all, so this is not an Official Complaint or anything, but - the noise, the bottlenecks, the confusing layout and inaccuracy of the maps all led me to have a less-than-wonderful start to the con.

Time in the ConSuite with the lovely

oneagain helped, though, and I headed off to my first panel fairly refreshed. Reshaping Grimm and Goose featured me,

jesshartley, et al, and just talking about fairy tales and folk tales was a hell of a lot of fun, even if it was over the heads of some of the attendees.

And the reason I was pretty much floating on air during that panel?

slipjig had just given me Shadesong: The Card Game! I'll leave it to him to explain it, but - he designed and created a card game based on my life. That is so incredibly cool - I have no frame of reference for how incredibly cool that is. Whee! *laugh*

After the panel, I changed into my "prom dress" - a 1950s-style off-the-shoulder white dress with red flowers and a poofy crinolined skirt. Accessorized with stripey stockings. And red lipstick. And my hair Shoggoth. I had every intention of going to the Prom at the End of the Universe, you see... but I ended up losing track of time at the drum circle ands missing the prom entirely! I brought two bodhrans and an ashiko, and ended up sharing with not just Elayna, but

eustaciavye's 6'6" Danish Guy. My favorite moments of the circle - said Danish Guy getting into the groove of drumming, when he hadn't touched a drum in ages; Elayna actually getting out and dancing; Elayna kneeling patiently in front of Ian's younger daughter and instructing her to close her eyes, feel the music, and then begin to play along with it.

I finally hauled a reluctant Elayna up to bed, changed out of the prom dress, and roamed the halls a bit before going to bed myself. 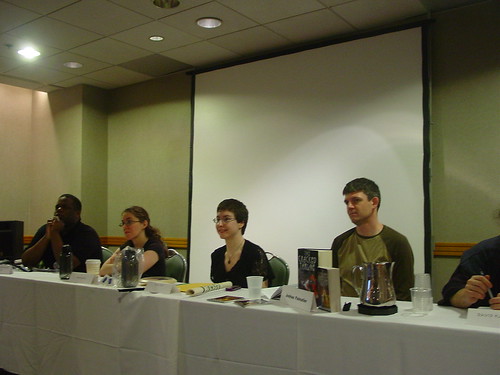 rosefox, and Joshua Palmatier on the City Building panel; picture by